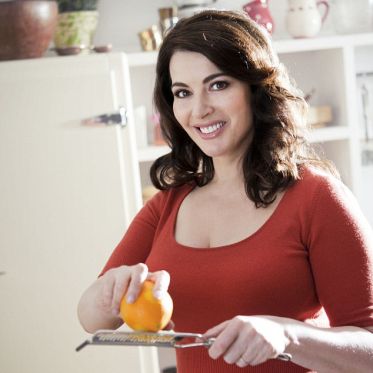 9 tablespoons extra virgin olive oil 1 1/2 tablespoons white wine vinegar 1 pinch caster sugar 1 bunch mint 1 1/2 kg peas , in pod (approx. 500g podded weight) assorted salad leaves 2 heads chicory lettuce 3 ripe avocados 1 First make the dressing: put the oil and vinegar and a pinch of sugar into a large bowl and then put in a decent handful of chopped mint. 2 Stir well so all is amalgamated. 3 Cook the podded peas for a short time in salted boiling water, just so they are ready, but not soft. 4 Taste after 2 minutes and then keep tasting. 5 Pour peas in colander and then straight away into the bowl of dressing and let steep for an hour or up to a day. 6 Just before serving, stir in about a packetful of mixed salad, the chicory which has been separated into it leaves and the avocado, which should be cut into bite size chunky slices. 7 You may need to drizzle a bit more oil after tossing. 8 serve this on a big plate. 9 Sprinkle with more mint.

Cherry Coke Float Cupcakes adapted from Nigella Lawson's 'How to be a Domestic Goddess' makes 12 cupcakes Cupcakes 1 1/2 Cups flour 3/4 Cup sugar 1/2 tsp baking soda 1/4 tsp salt 1 large egg 1/2 Cup buttermilk 2 tsp vanilla 1/2 cup unsalted butter 3 Tbs cocoa powder 3/4 Cup Coca-Cola 1/4 cup marachino cherry syrup 24 marachino cherries whipped cream frosting ice-cream chocolate shell Directions: 1. Preheat the oven to 350 F. 2. In a bowl, combine the flour, sugar, baking soda, and salt. Beat the egg, buttermilk, and vanilla in a second bowl. In a saucepan, boil the Coca-Cola, and cherry syrup gently for five minutes. Melt in the butter and cocoa powder. 3. Pour into the dry ingredients, stir well with a wooden spoon, and then add the liquid ingredients, beating until everything is blended. 4. Pour into the cupcake pans and push a cherry into the center of each cupcake. Bake for 15 minutes or until a cake tester comes out clean. 5. When cool frost with whipped cream. Drizzle on chocolate glaze and top with a marachino cherry.

2 1/4 lbs cocktail sausage links 2 tablespoons sesame oil 1/2 cup honey 2 tablespoons soy sauce 1 Preheat the oven to 200C/400 degrees F. 2 Separate the sausages if they are linked and arrange them in a large, shallow-sided roasting tin. 3 Whisk together the oil, honey and soy sauce and pour over the sausages. 4 Mix all together. 5 Bake for 25 to 30 minutes. 6 Give them a stir about halfway through cooking.

410 g evaporated milk 700 ml skim milk 500 g pasta 300 g broccoli 1 teaspoon mustard powder 90 g butter (or margarine) 75 g flour 250 g cheese (cheddar grated) pepper salt 1 Preheat oven to gas mark 7. Mix milk and evaporated milk together in a jug. In a medium lidded saucepan melt the butter add the flour and stir cooking on a low heat until it smells biscuity and has gone golden. 2 Take the pan off the heat add the milk mixture little by little whisking each addition thoroughly to incorporate until it is all added. Add mustard powder. 3 Put pan back on medium heat and stirring with wooden spoon cook for approx 10 minutes until thickened and flouriness has been cooked away. Add 3/4 cheese, saving a bit for the top of the mac. 4 Boil the kettle and place hot water in a new large saucepan. Salt well and then add macaroni. Bring to boil and cook for a couple minutes less than packet instructions. 5 Mix the pasta, broccoli and cheese sauce in a large oven-proof dish, Sprinkle over remaining cheese and bake for 20 minutes.

1 onion , peeled 1 celery rib 2 tablespoons garlic oil 1 teaspoon dried thyme 2 (14 ounce) cans diced tomatoes 3 1/3 cups water (use the tomato cans, you need 2 full cans) 1 teaspoon sugar 1 teaspoon kosher salt , flakes or 1/2 teaspoon table salt fresh ground black pepper , to taste 1 Puree onion and celery to mush in food processor. Remove 2 tbsp of puree and set aside in a small bowl for the meatballs. 2 Heat oil in large skillet over medium heat until shimmering. (If you don't have garlic oil, saute 1 thinly sliced garlic clove in 2 tbsp oil until golden brown and very fragrant, about 3 minutes; remove and discard garlic before proceeding.) Reduce to medium-low, add vegetable puree and thyme, and cook, stirring occasionally, about 10 minutes. 3 Add tomatoes, water, sugar, salt and pepper. Bring to a gentle boil, then reduce to a simmer and let cook while prepping the meatballs. 4 Add all meatball ingredients to reserved vegetable puree. Mix gently to combine; avoid over-mixing to prevent the meatballs from being leaden and heavy. 5 Form mixture into approximately 50 meatballs (each should be about one heaping teaspoon). Once all the meatballs are formed, add them to the simmering sauce. Continue to simmer 30 minutes, or until the meatballs are cooked through.

1 day-old loaf unsliced white bread, crust removed and broken into 3/4-inch cubes 2 pints whole milk (1 liter) 1 onion , peeled and quartered 4 cloves 2 fresh bay leaves 1 teaspoon white peppercorns 2 blades fresh mace or 1 teaspoon ground mace 2 teaspoons salt 1 ounce butter (30g) 2 tablespoons double cream (optional) or 2 tablespoons clotted cream (optional) or 2 tablespoons whipping cream (optional) 1 fresh nutmeg , for grating 1 Remove the crust from the bread and tear the stripped loaf into a mound of rough chunks or cubes about 2cm/(3/4-in) in size. You should end up with 175-200g (6 1/4-7 /4 oz) of cubes. If the bread is not slightly stale already, leave the pieces out on a wire rack to dry out. 2 Pour the milk into a saucepan. Press a clove into each quarter of the onion. 3 Add the onion quarters, bay leaves, peppercorns and the blades of mace (or sprinkle the ground mace into the pan) along with the salt and bring to the mixture almost to its boiling point. 4 Remove the pan from the heat. Cover the pan with a lid and let the ingredients infuse for at least half an hour, though you can leave it for a few hours if that helps with your cooking schedule. 5 After the mixture has infused, place the pan back on a very low heat. Using a slotted spoon, remove the onions, peppercorns, cloves, bay leaves and the blades of mace. 6 Add the bread to the saucepan and cook for about 15 minutes, stirring every now and then, by which time the sauce should have become thick and warm. 7 Just before serving the bread sauce, add the butter to the saucepan and stir until the butter has melted and combined with the sauce and season, to taste, with salt. 8 Add the cream (if using). Grate over quite a bit of nutmeg, adding more once you have poured the bread sauce into a warmed bowl or gravy boat.

9 1/2 kg pork shoulder, skin scored 6 garlic cloves 1 cm length fresh ginger 2 fresh red chili peppers (or 1 teaspoon dried red chili pepper flakes) 3 tablespoons olive oil 4 tablespoons rice vinegar 1 The day before you plan to serve the pork, preheat your oven (make sure it's clean) to the highest heat possible. 2 Sit pork skinside up on rack in a roasting tin. 3 Chop garlic and ginger, and then pound to a paste in a pestle and mortar, add chilli or chilli flake and 1 tbsp of oil and 2 tbsp vinegar until spreadable. 4 Rub this paste all over scored skin, pushing it into the cut lines of the rind. Place pork in oven and cook 30 minutes. 5 In bowl that paste was in, pour the rest of the oil and vinegar. When pork has been in oven half an hour remove it from the oven, switch heat down to 120 degrees Celsius 6 Turn pork over (best to use oven gloves for this, though they will get dirty). Pour oil and vinegar over the underside (now the top of the pork)and put back in the low-heated oven for 23 hours. 7 About half an hour before you're ready to eat, turn oven back to the highest it will go, remove pork and turn it back crackling side up. Put it back in the oven for 30 minutes to get it hot and crisp. It may need another 10 minutes to get it really crisp. 8 Remove pork from oven, slice off the crackling and break it into pieces. Carve meat into slices and serve with crackling.